How sparse should a clouser minnow be?


58 replies to this topic

There has been a discussion developing as part of SmallieHunter's Smallmouth Swap #2. Discussion of clousers starts around page 4. I thought it best to start a new thread on "the tying bench" to continue this offshoot discussion.

Anyone who has discussed tying clouser minnows has heard that the sparseness of the fly is a key factor. So the question is "How sparse?".

I don't recall where I heard it. It was suggested to me that when tying Clousers, one should measure out how much bucktail to use in terms of 'toothpicks'. Imagine your average toothpick in terms of diameter. Now consider a clump of bucktail that is about two toothpicks worth.

Now look at one of your clousers. Honestly consider how many toothpicks worth of each color you are tying in. If the total is more than four you might have too much bucktail. Yes, the size hook your using may make a small difference, but I bet it makes less of a difference than you might first think.

This is OMO (One Man's Opinion). YMMV (Your milage may vary). I'm not trying to start any heated debate or anything, but what would be your advice to the person who is just learning to tie a clouser minnow?

I'm guilty as charged. Real heavy hands with the bucktail on last years Clousers. Two toothpicks, man that is sparse.

Ryan, the store manager at my favorite local shop, ties his clousers with three colors of bucktail. He starts with the hook upright and binds down one or two toothpicks of white. He then turns it over and binds down one (maybe two) toothpicks of a yellow (a light color). Both of those are bound in front of and behind the eyes. He then ties in two toothpicks of a darker color (like a chartruse). This one color is only tied in front of the eyes. They look really nice.

If you fish a clouser for a while, you may loose a bit of the hair over time. Think about it for a bit. Does one of those clousers that has started "balding" fish better or is it less productive than a "fresh" clouser with a "full head" of hair. My experiance has been that the balding one catches more fish. This just adds to the goal of tie it sparse.

Father Time is my brother

I actually got to fish a real Clouser tied by the master himself. It was very sparse, the two toothpick rule is about right. I owe Irish one real Clouser, because I snagged that one on the bottom and broke it off.

Some drink at the fountain of knowledge. Others just gargle.

TroutBum has it. Bob ties about one toothpick worth on top... maybe a bit less for the belly. I've seen him tie them this way on a maybe a #1/0 hook.

I still can't bring myself to do it! Sparse as I get is about two unless it's really small, but then you're only suposed to have a top bundle, none underneath.

I use Clousers for Channel Cats here- and the more sparse the better:) 1 toothpick for me

It was a great idea to move this topic to a new thread. I should have moved it when I commented on the amount of hair to use.

My comments from Smallmouth fly swap:
If you look at the clouser minnows Bob fishes with, they have half as much hair. Bob ties them very sparse, but they do not look effective. He said customers will not buy the sparsely tied flies, so he adds a little more hair to please them.

Bob spends more time fishing for Smallmouth than anybody I know, He said the sparsely tied clousers have a translucent quality and catch more Smallmouth than the fuller tied patterns.

I fish the Susquehanna (only minutes from home) quite often, and I will testify to Bob Clousers sparse minnow patterns. One of the best flies ever designed.

Here are some pics I took tonight. Sorry about the quality, I have a great camera, but poor lighting and beginner photo skills, (where's Will when you need him, working on the forum probably)

The first picture is a Clouser Minnow I purchased at Bob Clouser at his shop (I keep store bought flies for templates). Notice the thickness of hair. 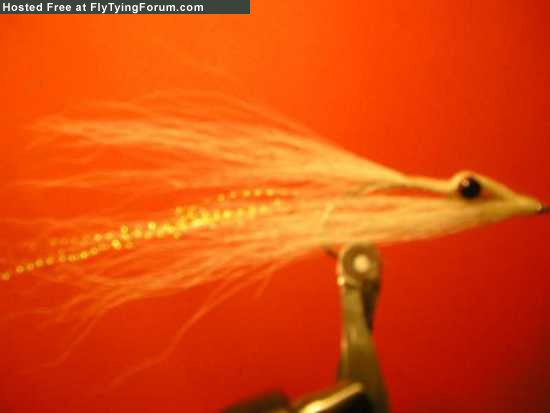 Below is a photo of how I tie them from the instructions given by Bob Clouser. Very sparse. Works for me. 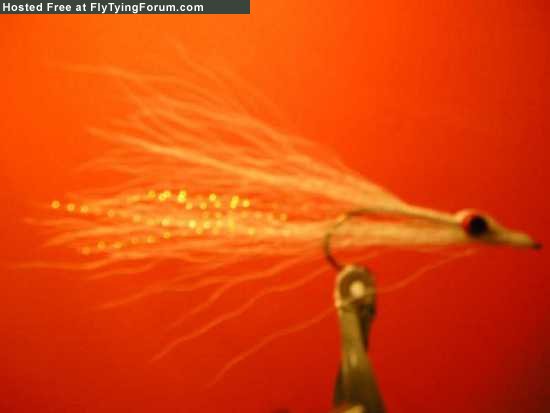 I gotta admit I would never have thought that one that sparse would be better than one that looks "good". But if that's what the fish want then that's what they will get.

I too like Clousers and fish them a good bit of the time.

I have several flies that I watched "The Master" tye in his shop. Two of the flies are tyed in chartruse and one is a size #4 the other #6. Both look to have about the same amount of deer hair .

Bob also uses both krystal flash and flash-a-bou in both of these flies: don't know what he uses on the many other variations he tyes. I am sure it is "unlimited". Most of the Clousers in Bob's shop have RED dumb-bell eyes. He might use other colors but I do not remember seeing them when I was last there. The eyes and the placement of the eyes on the hook shank are important to the tye ( this has been discussed over and over again in many articles). And Bob likes the eyes about 1/3 of the hook shank length from the hook eye.

If you have never seen Bob tye make an effort to go and watch: Bob has huge hands and they just are amazing at the vise. He is one of the nicest guys in the fly tying community. The first time I met him--I walked into his shop in Middleton and introduced myself. Told him I had driven six hours to meet him: he got up, shook my hand and invited me into his tying room. We talked for about an hour and he tyed me these two flies. Like being with an old friend. I am sure he treats everyone exactly the same--What a guy.

This is just an one old man's opinion,


I see there is some interest in CLOUSERS.

Maybe we could get Troutbum or Conehead to host a Clouser swap ? ? ?

Spring is comming and those smallies like Clouser Minnows.

I'm "in" if we can get somebody to host. Say maybe 12 swappers;anybody interested ?

So is this too sparse? THeres about 1 toothpick on top( flo green), and 2-3 toothpicks worth on bottom( olive)

Fans of the Clouser,

Went and dug out the video: "The Complete Clouser Minnow." In the video Bob states that the top bundle of deer should be "twice" as large as the bottom bundle. Words from the master. So if ya got one (1) toothpick's worth on the bottom of the fly ya need two (2) toothpicks worth on top.

The flys I have look a little SHY on the top bundle. Bob Clouser tied them and if it's good enough for him--it's sure fine with me.

DOH!! Mine is backwards

I think your a bit too sparce.

Look at the above pictures--just add a bit more bucktail.

Back to Featured Topic Archive