10 replies to this topic

Looking to buy some ox ear hair in a light sandy color, possibly also other colors....
Also top quality processed badger hair (not fur patches, just the processed hair)
Pm me if you have any you could part with, much thanks

Both are used in high quality paint  brushes and badger is used in shaving brushes. I'd search the net for "ox ear hair brush" and "badger hair brush" or visit the local artist supply shop.  I've read that women's hair extensions could be subbed for ox ear.

Thanks guys. I'm already on the artist brush (ox ear) / shaving brush (badger) route, only so far with what my daughter would call "meh" results. I'm just hoping to maybe avoid some trial and error if anyone's gone down the same woven hair hackle road and has extras they no longer want or need....

You want Asian badger hair, not North American. Good luck trying to go the paint brush route. Most Chinese suppliers require a one kilo minimum order for either hair. It's probably why the folks that still tie Pott and Grant flies use subs like elk or horse mane. If you don't plan on tying tons of patterns, you can buy Asian badger in patches from Sybai. They have both light and dark patches for fly tying. For ear hair, try Musk Ox guard hair. One good sized piece will have lots of guard hairs which are around a foot long, so you can get several clumps of weaves from a length of it. It also has a little variation in the color of the hair. The place I got a large piece from was Promise Land Tannery here. You can contact them and get any sized piece that you want. Here's a quick pic of a couple of non-woven collar hackle flies that I tied last year. The body is Musk Ox gaurd hairs and the hackle is badger. I still have to try my hand at weaving the collar hackles.

Exactly. I'll let you know if I find any.

Thanks FT, I got it, just wanting to see if I can hunt down the real McCoy...

I was just thinking about how hard it was to find those things in Mt. back when, no global trade, no pro fly tying suppliers, no internet, those flies must have cost a fortune to tie if paint brushes weren't the source. They would each had have to have Asian sources for the badger?

Shaving brushes are commonly made of European badger and where the hair comes from the pelt determines the color and quality. This reference may help in that direction,  http://shavenook.com...ad.php?tid=5535

If you have a local butcher that slaughters beef, you could get an ear and do the processing yourself. Unless those were musk ox ears they said they used. 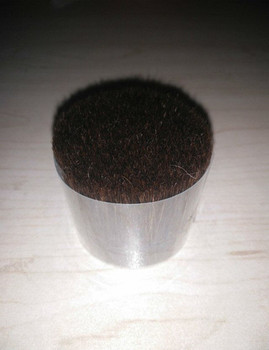 Tjm, Yes, Grant says in his book that ox ear hair was $75 minimum purchase as late as 1980 from a brush manufacturer, and Asian badger was just as difficult to find though less expensive. The butcher idea -- as best I can tell they're removed at the slaughterhouses.

FT, yes, there are a few sources on Alibaba that do look promising, I'm waiting to hear back. (Same with silvertip badger knots). Prices aren't too bad, if I can order just a little.

I'm also gonna call up the sources Grant lists in his book, but those are nearly 40 years old now... You never know.

It's a bit ridiculous, I know, but the hunt is becoming part of the fun at this point. If I can't find a reasonable means, there's always elk mane, skunk tail, even synthetics, even moose or other hairs, and for nymphs gray and fox squirrel tail, all of which Grant thought were somewhat lesser though still perfectly viable alternatives. I'll probably try all those regardless.

"Fly tying is replete with unproven theories and contradictions and therein lies much of it's charm and fascination." George F. Grant, The Master Fly Weaver
Back to The Trading Floor