24 replies to this topic

Arent steelhead just rainbow trout or are they a different species?

Depends who you ask.

Also where the line is drawn differs, again depending on who you ask.

Generally, in the company of non-anglers, or those who aren't as "into it" as me within the state of PA, I'll call the big salmonids in Erie "steelhead" and leave it at that.  When talking with friends from the PNW, many of whom look down on the existence of the great lakes salmonids and refuse to consider them steelhead, I'll qualify them by calling them "Great Lakes steelhead", "lake run rainbows", or "Erie steel".  I'll also jokingly call them "steelbows", "mutts", or "rustheads", the last given their proximity to the Rust Belt cities.  Whether due to genetic differences or by virtue of their being, at adult size, an apex predator in the lakes and having little current to fight or thousands of miles to cross, they do indeed get fat... 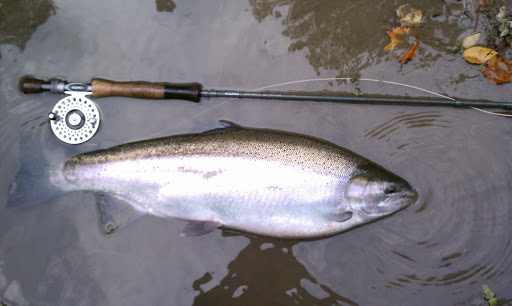 Again, if you're dead set on the state of Ohio you should seek the help of a mental health professional, there's not much practical fishing advice I'd feel qualified to give you, since the PA steelhead game is so different due to the way you approach fishing for a 10 lb trout in a stream that is often less than 20 feet across.  If you're thinking of straying into the PA water during your eventual trip, that's where I can help out.  But if you decide to do that, come here first...or wash your gear thoroughly at the border.

Sorry you went to all that effort researching Atlantics in Ohio.  I was just being snarky.  Maybe I should have said Blue Fin Tuna?

There are actually some strong runs of Atlantics in the UP of MI.  Just tiddlers by the Gaspe standards.

No expert, but a steelhead is a rainbow living like a seatrout?

Adam, I'm not sure what sea trout you're referring to, but when I think "sea trout" I think of these...

If this is what you're thinking of, then no.  They're in different orders, and barely related at all, as fishes go.

In my world there is only one seatrout, some call them sea run browns! Would the steelhead not be the same as a sea run brown? = Brown or rainbow, go out to sea, get pumped up on sea steroids, come back up river as a tuff ass take no s#!t torpedo?

The photo Cold put up looks like a brown to me. Browns are not the same as Rainbows.

"The spotted sea trout that live in the saltwater lagoons around Florida's coastlines are not a true trout, but a sub-species of the weakfish."

It makes sense that a Florida Sea Trout wouldn't be a true trout since I suspect the water there would be too warm to support Browns or/and especially Rainbows.

In my world there is only one seatrout, some call them sea run browns! Would the steelhead not be the same as a sea run brown? = Brown or rainbow, go out to sea, get pumped up on sea steroids, come back up river as a tuff ass take no s#!t torpedo?

In that case, yes.

Both anadromous members of their respective species.

For the "real steelhead taste salt" crowd, the GL variant is reverred to as potadromous.

Even though there aren't steelhead in the rivers at that time, there are smallmouth.  Those fish are a blast!

Back to Coldwater Species