So what happened to Steve's Christmas Rod Giveaway?


17 replies to this topic

Lost track of the post and have been waiting for it to show up and no luck so far. I'll keep checking. PO must be getting it pretty soon.

Will be more of an end of year/new year giveaway rod now. With my brother in law back & forth in the hospital the past month and him not being able to drive for 6 months because of the seizure, we've been having to do for him so things have been running waaaaaaaay behind for me this season.

BTW- I haven't updated about him for a bit. He had another doc apt today and got some good news, the infection in his hand is about all gone now so the worries about losing a finger/hand are over. Just has to go back for the diabetes issues again after the new year but as of now the insulin and strict diet seem to be keeping that mostly in check for the time being.

Man Steve I didn't realize he was having health issues as well, sorry to hear that glad his finger is safe.

Yeah he has been having a real bad year. Since losing my Sister in May, he had a diabetic issue back in September which resulted in having a seizure, as well as a brain lesion and losing his vision for about 3 weeks. He was in the hospital for about 10 days for that then after they got him on insulin twice per day and a very strict diet his diabetes finally got a bit more under control and his vision started coming back. It was really bad through all of October. He stayed here during the day for about a month and I would take him for daily walks and had to guide him almost like a seeing eye dog telling him where to step and when to stop.

Thankfully his vision is now back to 100% normal. His diabetes is under control with the twice per day insulin and diet, but he recently hurt his finger at work now that he's back to work. Problem is he has diabetic nephropathy (spelled right??) so he has no feeling in one of his fingers, so when he hurt it he really had no idea how bad it was. So we took him to the ER about 3 weeks ago and they ended up keeping him in the hospital again for about a week because his hand was infected. They were talking about the possibility of it being a bone infection, which with a bad diabetic like him often results in losing body parts. Luckily it only took a week of IV antibiotics in the hospital then 6 days of pills at home and now today they said the infection is gone so that was really good news.

Now you guys see why I can't wait for 2019 to be over, between losing my Sister, all this with my brother in law, no longer having my Niece in my life because of her life choices...by far been the worst year of my entire life.

Sprry about all this. I had no idea you were so distracted by family health issues again.  No rush at all on my project. Lots of snow coming before the spring thaw

Loss of digits and extremities due to neuropathy is the most common "side effect" of diabetes.  Nephropathy is issues with the kidneys.

Diabetics have two major concerns: monitoring their blood sugar and monitoring their extremities.  We had an instructor at work with major diabetes.  Over the course of two years, he lost both feet, then both lower legs.  When he lost a hand, he had to take full disability and stay home.  He passed within a few months of that.

He just didn't monitor himself sufficiently.

I hope your brother-in-law has learned from the hand infection.  Every day, look for cuts and bruises.  Good luck, Steve, in the coming year.

Sorry to hear about your BIL. I know your family has had a ROUGH year. Heres hoping that 2020 will be a better year. Happy Holidays!

We Are The People Our Parents Warned Us About 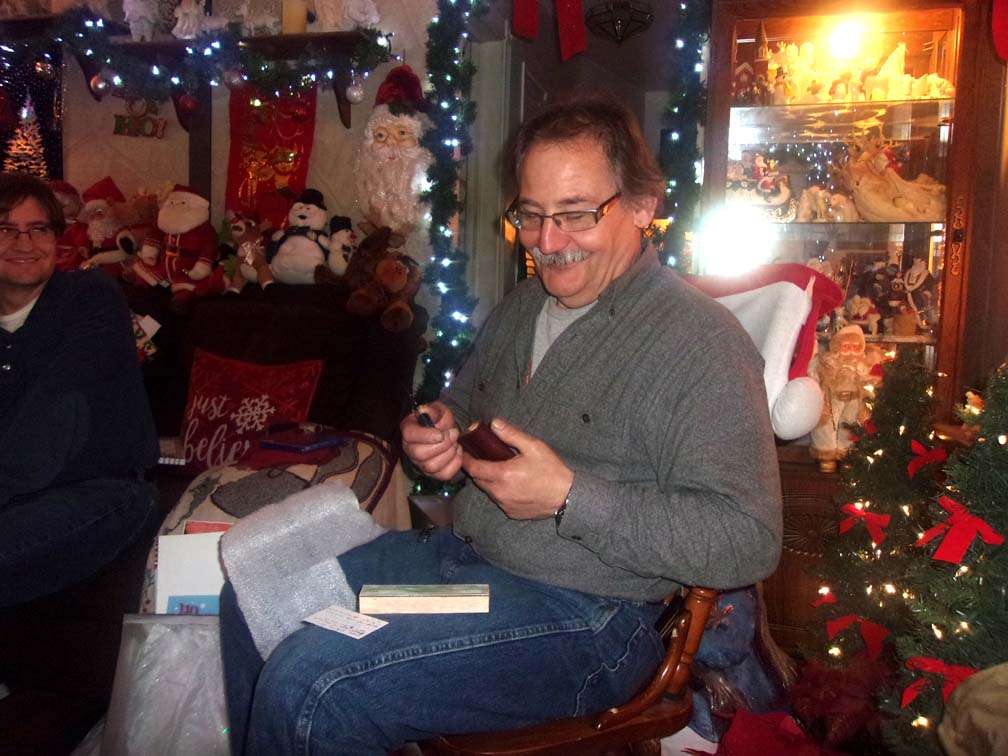 vicente thought you might like to see a pic of Bill opening the knife you made for him. He really liked it a lot

Awesome Steve I always appreciate hearing how people like their knives, I hope he gets many years of good use out of it.

Sorry to hear about your but it's nearly over and things are going to be better this year. As for the knife, that was all Vicente and yes, he makes a great knife. I hated so much sending the one from last year to someone else I had to buy one for myself and it was a heck of a good deal. I'm hoping someone wins that rod who appreciates it as much as your BIL appreciates the knife. I'll quit hassling the Post Mistress for her hiding my rod on me but will wait patiently until Mike spins the wheel for you, or you spin it.

Sounds like 2020 can't come quick enough for you and yours Steve.
It always amazes me at work how relaxed people are about their diabetes. Too late to worry when the symptoms start.

Piker20, a young guy up in Finland used to joke that his doctor he could substitute a beer for a slice of bread in his diet. He said he'd be 95 before he could have a sandwich if he quit drinking now. He didn't quit and last I heard he was in a wheelchair and probably in his late 40s. It's a silent killer like BP and the costs of insulin today in this country causing people to have to cheat on their doses is near criminal, like the cost of so many other life giving drugs. We take too much medication in this country but those that actually keep people alive and active should not be priced out of reach of anybody needing them. Soapbox done. Don't want to get this too political.

I thought this was a non-political website, Mike... Please?

I've deleted my comment, that started all the comments.  They weren't bad ... but It's only a matter of time.  SO, we're back to the original posts and content.

Back to The Lodge

Reply to this topic