Nymphs: To Bead or Not to Bead?


58 replies to this topic

There are two concepts that I teach that every nymph fisher should know. The first concept is "Effective Drift Length (EDL),“ and the second is “Effective Natural Drift (END).”

We all unconsciously apply these two concepts when we dry fly fish. Because we can see where the rise is when dry fly fishing, we instinctively know that the fly must be in the right current seam, on (adult) or in (emerger) the surface film, AND drifting drag free. Only when all of those three things occur do we have a chance of catching the fish.

The identical principal applies when we are nymphing. The fly must not only be in the correct current seam laterally (1) but vertically (2) in depth as well, and the must be as drag free (3) as possible. Only when these three criteria of lateral and vertical location and drift speed are correct is the drift most effective in catching fish. The fishing method that gives keeps the fly at the correct location for the longest length has the best "Effective Drift Length". When the fly is moving naturally at the correct drift speed, it has “Effective Natural Drift.”

A fly is only effective if it is at the level of the feeding fish. If the fish are at the bottom, a fly that is drifting above them is ineffective. It is only after the fly sinks to the level of the fish that the fly has an “Effective Drift Length". So the time the fly takes to sink to the bottom is wasted. If your flies never get to the fish, the entire drift is ineffective. That is why fly tungsten beads are more effective than brass beads. They sink faster and have a longer “Effective Drift Length" for the same cast.

The second concept is “Effective Natural Drift.” Does the fly drift like a natural nymph or pupa? My view is that unweighted nymphs drift more naturally. My belief is that you only weight the nymph if it adds to the natural action or it does not detract from a natural behavior. Otherwise I weight the leader.

I believe split shot(s) do not distract the fish. If fish ignore a leader that is tied directly to the fly, why would they be distracted by a split shot that is on that same leader but 12 - 18 inches away. If they are distracted or put off by anything, it will be any unnatural behavior of the nymph and I believe weighted nymphs act unnaturally. The may have a long “Effective Drift Length" but during that drift, they do not act naturally. So “Effective Natural Drift” is absent.

If a bead head does not drift naturally, why does it catch fish? It does so because they get to the bottom faster for a long “Effective Drift Length" AND a bright bead can be an attractor. I believe bead head work in fast water when the fish have less time to examine the fly for natural drift and when the fish feed by reaction strikes. So in fast water with turbulent flow, “Effective Natural Drift” is less important.

I believe the latter rather than the former. Adding weight to the leader also allows me to micro adjust the weight I want to use. If you use only a weighted fly, you need to tie flies of multiple weights. Even then, you may not be able to pick the right fly for all speeds of the water flow and water depth without adding weight anyway. So if you have to add weight to the leader when you use bead head flies, why not use un-weighted flies and use adjust the split shot to get the flies down.

I also think my method of using unweighted flies is in the minority. I believe more nymph fishers do use weighted flies or bead head flies.

Since the Madison River is often crowded, I can fish behind other fly fishers and catch those fish that will reject bead head flies. Here are two fish I caught from the same run following another fly fisher. Notice that both fish have no hook scars which means they are infrequently caught. The second has a talon scar  on the head from either an eagle or an osprey.

How did we ever catch fish on nymphs w/o beads?

I use them of course, but more often prefer point nymphs weighted old style with wound-on lead strips which can be flattened a bit for an ovoid shaped body that moves a bit too.

Where legal, unweigthed nymphs  and wets on droppers above the point nymph give ample coverage of the water columns.

Beadhead flies have been used in Europe for many years and especially in the Fly Fishing Competitions that use the European rules, which prohibit the placement of floats (strike indicators) or weights (split shot) on the line/leader. So fly fishers have adapted by using in-line colored mono as "sighters" to indicate strikes and beads to make flies sink.

Although several noted fly tiers including Roman Moser and Bas Vershoor along with Dutch fly tier and fly fisher, Theo Bakelaar, experimented withe bead head flies; it was not until the early 1990's that bead head nymphs become popular in the USA. That was when Theo Bakelaar covered himself in Gold Paint to tie his gold bead head flies. He became known as Mr. Gold-head and he is credited with the popularization of bead head flies in the USA. 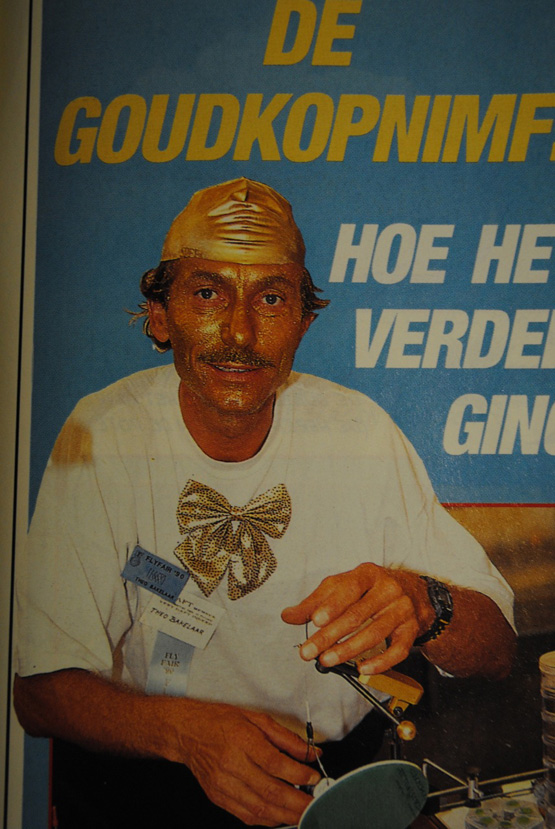 “Theo Bakelaar is a tier from Holland. Bakelaar is largely credited with the bead revolution and at one time wore a gold helmet at tying demonstrations ( ie a gold bead head....get it?)”

“Back in 1990 'Mr Gold-head', or Theo Bakelaar from Holland, covered his hands and face in gold paint and sat and showed the crowds at the Dutch Fly Fair how he tied his Gold Bead-head Nymphs.  This publicity started a fly tying revolution; a simple adaptation to the humble nymph has become a standard around the world.  Bead-head flies are not new; be they glass, metal or gold, they’ve been around for eighty or ninety years but had only become popular thanks to Mr Gold-head.”

“Thanks to the efforts of Roman Moser from Austria, and the skillful Dutch angler and fly tyer, Theo Bakelaar, the golden headed flies were reborn in the late eighties again. Theo, now better known as "Mr. Goldhead," has probably the largest collection of gold headed flies in the world, and introduced them in the USA.“

I carry both but its beadheads 90% of the time.

I like beads, but i'm more of a lightning bug fan! I'm mad on using a nymph on 40cm of line tied straight to a dryfly hook bend before & after summer, that way i still get my dryfly horoin fix! Fish take both flies & i never get any tangles in casts, but i never false cast! Only ever false cast a couple times feeding line pike fishing from my floattube!

I like to use beads for fast water, or deep pools. But in the slower, shallower water I normally don't. But, if I don't use a bead, i will normally always weight my nymphs with lead wire.

Both I mainly Czech nymph so the anchor fly is always beaded with tungsten. the other one/two may or may not.

I use a mix of both. Beadheads for deeper/faster water or when I want a pattern with a little more attraction and unweighted for shallow riffles and smaller water.

i´m using lead wire (upside down) for depth or micro-bead in the curve of scud - or modified klink-hooks.

they are totally covered.

I really haven't done as well on beadhead nymphs as I have internally weighted nymphs, especially caddis. But I was a slow adopter of beads anyway, it's just in recent years I tie and use more beads than in the past. I still like a nicely tied caddis pupa with no bead but plenty of weight inside, about size 12 or 14. It could be because beads are so popular now though too, the fish see something different in no bead maybe.

Voted most don't have bead heads, I rarely use them and when I do it's usually just to get a lighter nymph deeper in faster water.

Voted both and have both in my boxes.

Just as my brain classes cone heads as not streamers.

Thread has good info and cause to think in it.

Head weighted flies are all (to me) fished as jigs and I guess that is what my brain categorizes bead heads and cone heads as. Will have to think some more on this.

Tungsten beads on most of mine these days, and usually a bunch of lead wire on the shank, too. I fished unweighted nymphs for a couple decades, usually with split shot. I had the " natural presentation" thought, too. But I've noticed that I catch a lot more fish on beaded nymphs since I started using them. You can suck fish out of a creek like a vacuum cleaner with a long rod and a pair of heavy nymphs that sink like rocks. It doesn't matter how the nymph looks if it's not down there where the fish can see it.

Back to Coldwater Species