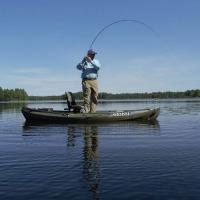 Born and raised in Mexico, MO -- tiny little farming town. Went to the University of Missouri-Columbia (MIZZOU), where I eventually met a woman from Michigan, whom I would later marry. A friend of hers from Traverse City came to visit her in MO right about the time I saw "A River Runs Through It." I commented in his presence that I didn't know why they were making such a big deal about fishing in the movie, like it was holy or something -- you have to understand that all I knew of fishing at that time was plunking worms into catfish ponds--and he said I should try fly fishing if I wanted to find out. With his help and instruction, I eventually did just that, and now I understand what all the fuss and poetry were about.
Moved to Michigan in 1997, fortunately to an apartment right on the Huron River in Ann Arbor. I did my formative fly fishing on that lovely, unassuming water and also gained my undying affinity for smallmouth bass, which are numerous and sometimes large there. I soon made my way to a few little trout streams and learned more lessons. My fly fishing mentor-buddy eventually took me on my first trip to the Au Sable River, and that sealed the deal forever.

Fished like a maniac on the loose during my first five years here -- bought a new Blazer in 2000 and put 30K on the odometer the first year, mostly fishing miles. My kids were born in '01, and since then I have fished like a more sane man, but with no less enthusiasm. Taught myself to tie flies and build rods along the way, out of economic necessity at first, then out of love for the craft.
It's been fun and I wouldn't have had it any other way. I hope I get to keep doing it for a long time.