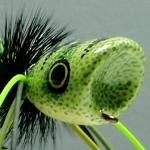 How I Got Into Fly Fishing and Tying Poppers

Although my father took me with him several times while he fly fished in local waters, nothing developed from my early exposure to the sport until my daughter married and lived for a year in Bozeman, MT. When my wife and I went to visit in 1999 the family spent several days in Yellowstone National Park. It was seeing the fly fishermen in the park's rivers that reminded me of the the experiences with my father fishing for bass, bream, and crappie.

Not long after I took a leisure course at LSU on fly fishing and joined the Baton Rouge Red Stick Fly Fishers. It didn't take me long to begin attending the monthly fly tying sessions. But keeping up with the class wasn't easy and I was disappointed in my efforts. I stopped bringing my vice and tools and instead observed and took notes. Between classes I'd practice what had been presented. Along the way I acquired a rather large inventory because each class used different materials. I must have been learning something because every year I would look at my ties from the previous year and decide they were too ugly to use or had other problems and would stash them away in boxes and start all over again.

Then I started tying micro poppers(Wapsi #10 & 12) hoping to improve my catch rate by using smaller poppers than were commercially available. It was just more fun for me when I could see the strike and Louisiana waters are commonly full of tree debris from past storms which makes fishing wet flies... interesting. My catch rate did improve. So I began tying them in different colors and experimenting with the tailing. More popper painting experiments followed and I eventually settled on using acrylic craft paints with self made tools created from metal rods and different kinds of sewing needles. In this way I could make use of skills I'd developed in the 80s when for a number of years I spent most of my free time creating Pen & Ink drawings using the stippling technique. The results were well enough received locally for me to decide to see how far I could take the technique doing a few each of several different designs each year most of which I framed and donated to the raffles at my local club in addition to what I tied for my own fishing use.

Fishing for bass and panfish with poppers is a southern tradition of long standing. In the fall of 2007 I was asked to do one of my club's monthly fly tying sessions on my poppers because several members were interested in seeing my process demonstrated. In August, 2009 my club put on a Saturday Popper Clinic for our members. Half of it covered making foil covered balsa pencil poppers and the other half covered my methods. As part of my presentation I developed a PDF document covering my painting technique and discussing other aspects of making poppers. Since then I've been modifying the text and adding to it.

It was my original intention to post the link to my Painting Stippled Poppers document after the text was more or less complete. However, enough people have asked me questions since I began to post images of my poppers that I decided to go ahead and post the link ahead of schedule. Hopefully it will provide an easy to access place to go for people who want to ask me questions. But feel free to contact me if you don't find your answer in my document. It will help me as I work to make improvements to the document.
------------------------------
Document Modifications

Changed out a number of images that were in previous version and added images of detailed steps for creating two of my designs.

Reformatted and added content in text and images. The document is now contained in three separate files. It was becoming to
large to comfortably manage in my Word Processor. There was too much time in each part to take a chance on the whole work
becoming corrupted by a file error.

The three files have now been combined into one thanks to finding an inexpensive software package for this.

The site changes from time to time. If the button on the image below doesn't show up
on the first screen the link brings you to, choose the Regular Download button.

This is currently unavailable. I am looking for a new tying site to post my fly and drawing albums.

If you care to take a peek, I have posted images of a number of my ties and a selection of the Pen & Ink Drawings which somehow eventually led me to what I do with my poppers here: