12 replies to this topic

Last week Paul and I went out to kayak fish the Medina and had a blast. The water was super clear though and we could not get any fish to bite. So I decided to head out on my own, wading the river and see if I couldn't get a few. The water clarity was slightly off color comparably, so I was able to get a few to nibble. Quite a few sunfish, and one really nice one. Then also some bass. What a fun time!


The fly that caught most of the fish was something I came up with. I called it the panfish delight. Here is a link to that tying video on how you can tie the same fly. https://youtu.be/AbdUmeNTABQ

From what could see, the sunfish you caught were red breasts, not long ears.  The latter have a blockier (if that's a word) end to their "ear", usually tipped with white or red, are more colorful than overall than red breasts.  Google both of them and see what you think -- you got a better look at the fish than I did.

And putting my pedantic hat on, unlike what you said at the end of the video, you didn't appear to catch any bluegill; they're a separate species.  This only make a difference to me because when I've helped out with teaching the Boy Scout fishing merit badges, a few of the scouts have caught red breasts large enough to qualify for the unclaimed state record, only to have their father id the fish as a bluegill and toss it back before I could say anything. (Actually I've caught red breasts big enough to qualify -- minimum is 14 oz -- but those sorts of things are more meaningful to kids, and I'd rather see a scout get it.)  I'd love to see people more conscious of what they're catching.

Red breasts are the sunfish that I catch the most of, since they're better adapted to rivers and streams than bluegill, and I seldom fish still water.

It's funny that the red breast sunfish actually have longer ears than the long ear sunfish but they do. I think it's a common mistake that anglers make. Nice video, nice water.

Nice video.  Wasn't sure where the Medina River was.  Up here that would be a classic smallmouth river.   I agree with redietz they are most likely red breast sunfish.  We have them up this way, though mostly I catch bluegill, pumpkinseed, green sunfish and red  breast.  This is from my local creek, during spawning season.  I'm pretty sure it's a red breast.

I like the fly, just not sure it would work in the local creek.  I've watched sunfish shy away from flashy flies on it.

"All things considered, I'd rather be in Philadelphia."

Nice to see some fishing for something other than trout.  Sunfish ... my kind of fishing !!!

I agree with the above comment about Bluegill.  Kind of like misnaming a Brook Trout and calling it a Rainbow.

I think the bass is a Spotted Bass.  Guadeloupe Bass almost have stripes, rather than spots.  I'm not sure, though.  Again, the pale coloration always throws me off.

I was thrown off by the lack of color. All the other redbreast Ive caught around here are super brightly colored. The ones I caught on this video had only a yellow belly. Not red. Also they didnt seem to have the blue streaks in them Ive seen in the redbreast.

Where I grew up, we only had bluegill in the lake I fished in (many many years ago). So I have the habit of calling any coin shaped sunfish a bluegill which I know is not accurate. Kinda like people calling all copiers a xerox machine. Either way, Im still not convinced they are redbreast, but again Im not confident in my assumption they are longear either. Haha. I still gotta learn all the different species, and how to tell the difference. I even was looking these up online before making the video to figure out what they were and couldnt seem to lock down them 100%. Haha! Oh well. Either way, whatever they are, they are fun! Haha!

Glad you guys liked the video. Thanks for the insight into the species and all. Ill keep learning and looking it up, and listening to you guys as well.

The ones I caught on this video had only a yellow belly. Not red.

"Redbreast" is actually a bit of a misnomer.  They usually have an orange breast.  Just like the ones in your video.

Here's video showing all the sunnies in the US:

My gosh man, what happened to the beard? Guess I haven't caught any of your recent videos but always liked the rugged look of that big red beard. As for fish ID, if they're big enough to fillet and fit in the pan they're panfish. I just call them all 'gills or sunnies to simplify things. Down here they're all called perch and that sure fooled me coming down from the north. So, enjoyed the video and the fly link and would love to spend some time on a river like that. We just don't have anything comparable here.

Key to long ear in my experience is the electric blue markings, but the white margin on the flap is distinctive also

they are commonly called pumpkinseed here but we don't have pumpkinseed https://nas.er.usgs....x?speciesID=382

redbreast don have any color but black on the flap and the breast actually runs yellow to orange https://nas.er.usgs....ential=Y&Type=2

It would be wonderful if some university or state fishery department would publish a comprehensive picture guide to identifying all the sunfish, but I've never found one.

Not sure if it is truly comprehensive, but have found this book to be a great and easily packable reference.

$.02 We callem red bellies down here in Dixie. Not so much in the lakes but all the rivers and streams. 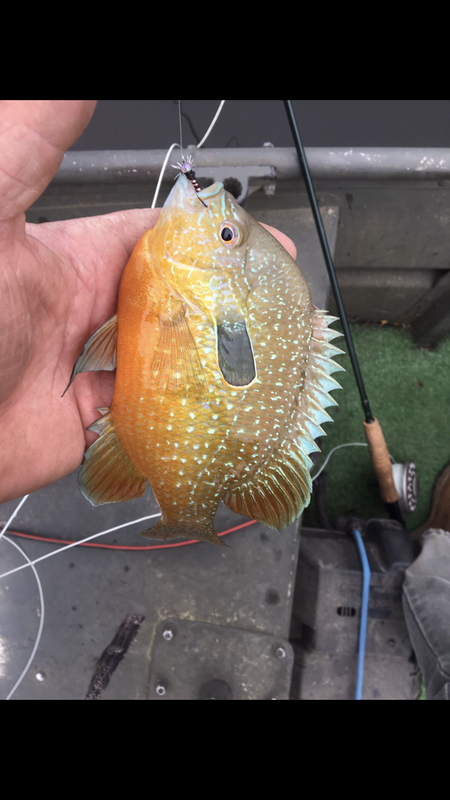 My gosh man, what happened to the beard? Guess I haven't caught any of your recent videos but always liked the rugged look of that big red beard. As for fish ID, if they're big enough to fillet and fit in the pan they're panfish. I just call them all 'gills or sunnies to simplify things. Down here they're all called perch and that sure fooled me coming down from the north. So, enjoyed the video and the fly link and would love to spend some time on a river like that. We just don't have anything comparable here.


I have to shave off the beard every 3 months now because I had melanoma, and they check everywhere for more spots. A month or so ago they did a biopsy of a spot on my nose and on my chin (my beard would have covered up the one on my chin). Luckily they came back ok this time. Anyway, its annoying but luckily it keeps me alive so.... haha!

Red, yeah I agree not all are red on the belly. However the ones Ive caught in this river were much brighter. And had red, and super bright blue streaks. Very beautiful fish. These ones I caught this day were not as colorful. But maybe they are. Not saying they arent redbreast, just look so different from the redbreast Ive caught before, even ones in this river.

Tjm, yes I agree, a place should put out an extensive list. Ive seen a few. But usually its a drawn photo without specific identification. Like specifically shape of fins, how to tell the difference between similar looking ones and the like. If anyone finds anything like this please share.